A lot of the Middle eastern and North African cuisines produce Kebobs from ground meats; lamb mostly but occasionally goat. Beef is a completely acceptable substitute. This version is made with Ground beef and if I had to pin it to any one of the countries of the region, I would probably pin it to Morocco since I am serving it with Cous Cous.

There are really multiple parts to this dish. The Cous Cous, the kebobs themselves, the chermoula and the yogurt raita or tadziki, whatever you want to call it. I will post the Chermoula separately since it is a dressing that is useful across many many dishes and link it here

Raita … or Tadziki with a twist


Serve the kebobs on a bed of heated Couscous dressed with the Chermoula. Serve the raita as the side

Traditionally Cous Cous with a Meat and Vegetable stew is always Lamb.  I have played with this before by using Beef; I tend to use something like chuck or other tougher stewing kind of cuts of Beef instead of cubed Lamb leg or shoulder.  I decided it was time to really play with this and use Chicken instead.  I did use dark meat aka thighs.  Breast or tenders would have been way too tender a meat and would probably dissolve into the stew.  The thing to watch out for is that chicken would cook faster and therefore the times have to get adjusted as to when to add the secondary ingredients.

Serve in a bowl with Cous Cous and a robust white wine like a Verdejo, Rias Baixas or even an Alberiño.  This dish has enough muscle to stand up to a red; in that case look for a fruit forward red.  The spices call for the fruit.

The bowl above, mine, I ate it with Quinoa instead of the Carb heavy Cous Cous with an extra dash of Harissa…

This post was posted in Main Dish, Moroccan, Spices

Coorg is a region of India which now part of the State of Karnataka or Mysore as it was known during the Raj.  It has its own distinctive flavour profile and is characterized by the use of Vinegar in its marinades as well as the bright fruity acidity of the finished dish.  This particular recipe was an attempt to recreate a Coorg style Chicken curry recipe.

Serve with rice and Yogurt to to cool your mouth against the heat, if it is warranted.

This post was posted in Indian, Main Dish, Spices 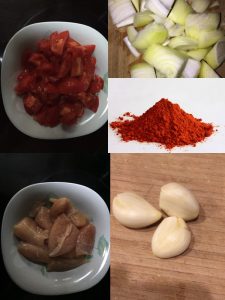 Doro Wat is a wonderfully spicy and I don’t mean “spicy hot”, but flavoursome chicken stew from Ethiopia.  It uses the Berbere spice from the last post.  Since the spices are robust, it is best to use chicken thighs rather than breast meat.

This is a dish that needs time.  The Ethiopian way of slow cooking the onions brings out a sweetness to them that is unparalleled.  So much so that I have taken up this as a means of cooking onions even for Indian curries etc.

Above is a collage of the basic ingredients of this recipe.  To process these as part of the mise-en-place, I used a Cuisinart stick blender with the mini chop attachment.  The onions really need to be chopped very very fine, almost a pureé. 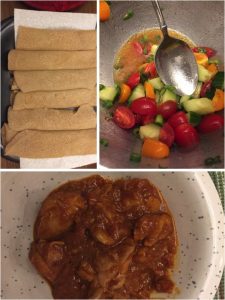 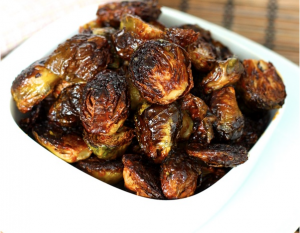 This is a classic Mexican dish with Pork and the bright acidity of the Tomatillos.  This certainly calls for a good Beer to go with it and my personal favourite is, as always, Negra Modelo. 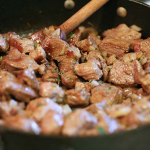 Keep the Negra Modelo at hand

This post was posted in Main Dish, Mexican, Pork